Never Give Up : Lesson learned at Onake Abbi Falls

Journeys can teach you some life lessons. Here is one such lesson.

Onake Abbi falls is a beautiful place near Agumbe. I wanted to explore this place. So I went there again. But this time alone.

The day was pretty good. Weather was nice. Even the rain took a break and that too even in Agumbe, the second wettest place in India. So I felt very good about the whole trip.

Even though I did an overnight bus journey and reached Agumbe a couple of hours ago, I felt fresh and started for the trekking.

I asked the general direction towards the starting point of the trek and started walking. First I took a wrong turn and reached a dead-end where I met a guy.  He gave me the correct direction in a language that I didn't understand completely. He also warned me about the leeches.

In fact I completely forgot to bring salt bag as a precautionary measure against the leeches. Then he generously helped me with a cup of salt. Meeting yet another helping stranger!

In few minutes, I was back on the right track. Then I could see a group of people walking ahead of me. I was not in a mood to go with a  group. I wanted to explore it alone. So without giving them much attention I kept on walking and got ahead of  them.

The trekking trail was just starting. 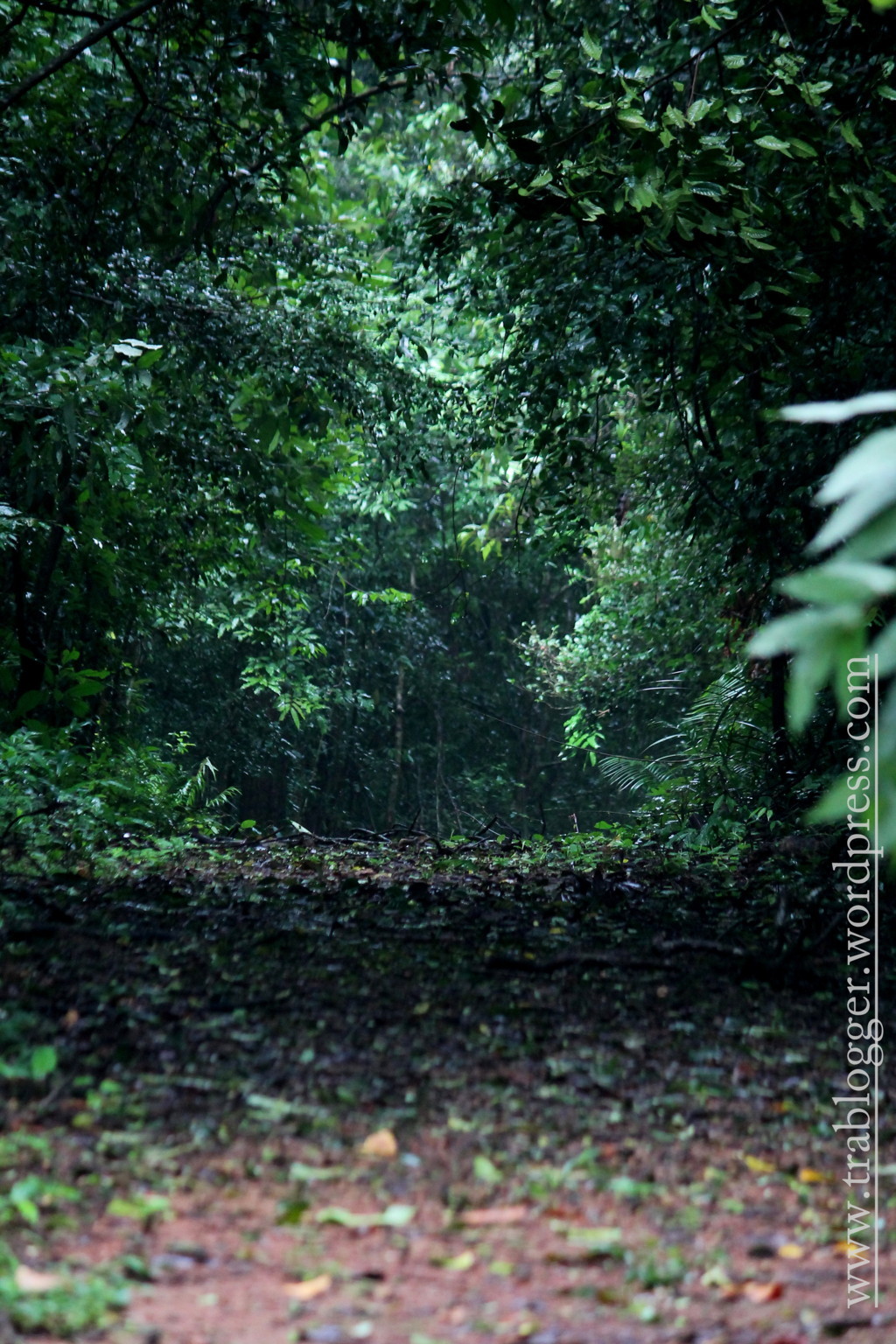 Start of the trekking trail to Onake Abbi

It looked really nice. The rainforest trek route obviously looked very green and paved with fallen leaves. Walking through that greenery was a pleasure.

The forest just got greener and dense

As I walked, the forest just got greener and denser. And I was surrounded by various sounds of a typical forest. There was this constant sounds made by the crickets and occasional chirping and whistling of various birds all around me.

Then there was this tree, lying across my path.

There is something interesting with those obstacles that we are so sure of overcoming. We get, sort of confidence to go towards it head on and beat it. So I jumped over the tree and successfully got rid of my obstacle. And I continued my walking.

Then there was the next one. Again not a big one. 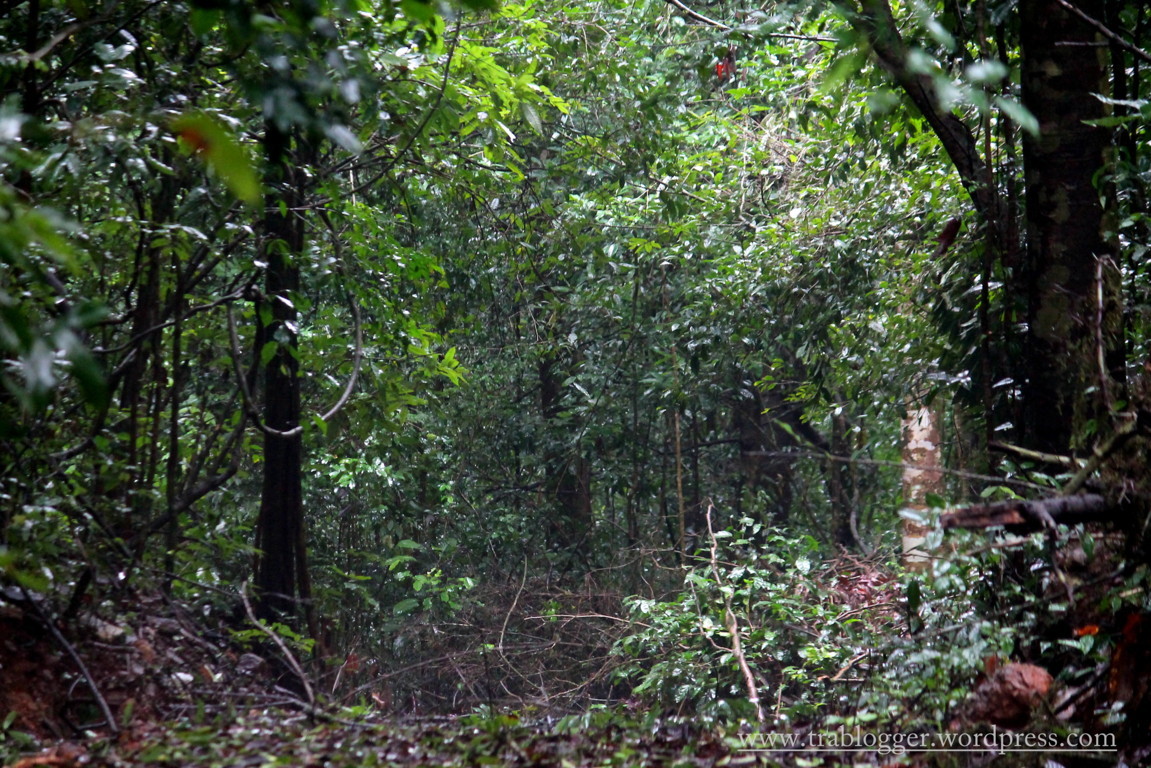 And there was one more big tree across the path again.

This was also jumped and crossed. It is fun to clear the obstacles and move forward. It gives us a sort of sense of accomplishment once we do that.

Walking continued through the clearly visible trails. But then I saw a flight of steps on my left that goes into the forest area away from the trails.

The steps leading to somewhere

I was confused. I didn't know which way would take me to the waterfalls. "Why would the authorities make a step if it wont take someone to the waterfalls? But there is a clear trekking train visible in front of me." My thoughts ran like that and  I was confused as to which way to choose. No sign boards, no one nearby to ask. So I decided to take the clearly visible trekking path in front of me. If I knew I made a wrong decision, I could always come back and take those steps leading to somewhere.

Thus I continued my journey through the trekking path. Then again there it was! Yet another obstacle. This time a bit bigger, something really like an obstacle.

It was quite tricky to find a path around the obstacle this time, but it was possible. By that time leeches started crawling up my unprotected feet.

Just after I crossed this, there was the next one.

And the next one

It was hard to find an alternate route. Obviously it was very easy to follow an already treaded path. But to find a new path and to create a new path is really difficult. Not impossible though. Somehow I was able to find a way to get around this difficulty also. And continued walking.

This time there was an invisible obstacle.

The invisible obstacle created by spider

I hope that you can spot the spider web. It was very big web and I noticed it only  when I caught in the trap. It was a big spider as well.

Without damaging much, I passed the spider web, just to find another big tree lying across the path. This one was a massive road block. There was no way to jump across the tree. And both sides were part of the dense forest and finding a way through it was a big task.

The biggest road block of that day

I walked up and down to find a way out of this obstacles and couldn't find one. On both sides, it was full of trees and plants. Agumbe rainforest is known for its reptiles and amphibians. King cobras are also in plenty. So braving into the forest could be a stupid decision.

Then again I was confused. I started to  think if I had made a wrong decision at the steps itself. I was all alone in that big rainforest and that idea itself was scary. I had already walked for quite sometime and couldn't find a trace of the waterfalls. No sounds of the falls to be heard till then. Also the group of people who were behind me were nowhere to be seen. So I was pretty sure that I made a wrong decision and wanted to go back to the point where I saw the flight of steps.

I wanted to Quit!

But something inside me told me not to go back. Out of an impulse, I took a leap of faith and braved into the forest. When I took that first step, I saw a very very narrow path, that I could take. Some how I made a path out of it and voila, I reached the other side of the big road block!

I was back to the trekking trails again. And I continued my walk. This time it was through dark and dense forest trails 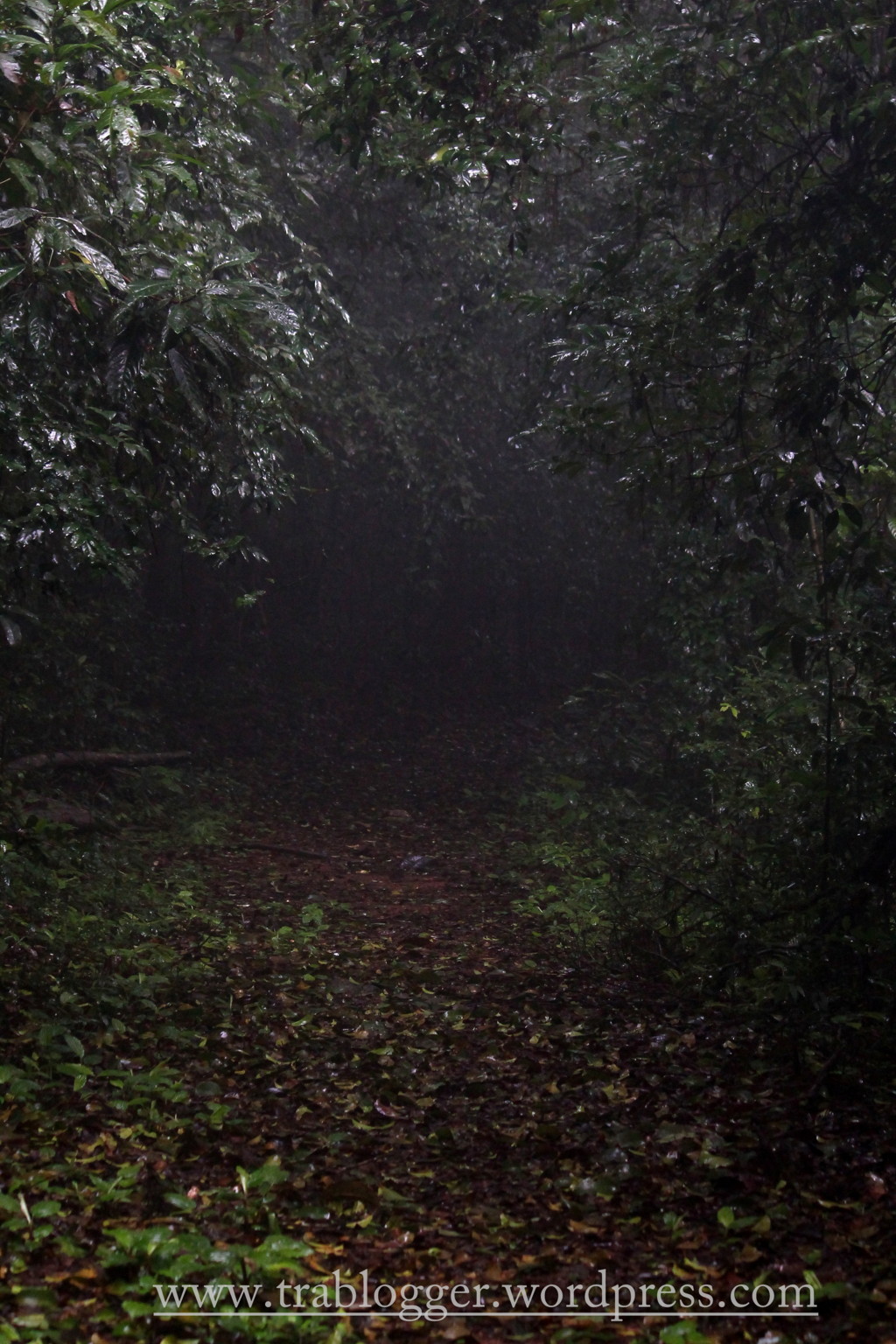 Still I wasn't completely out of my confusion. I was walking for quite sometime and couldn't able to hear any sounds of waterfalls. And before doing the trip,  I hadn't researched or read anything about the trail that leads to the waterfalls. Only time could tell if I was on the right path.

Keep moving forward is the only thing that we can do. I did just the same. But the path had become narrower and narrower. At one point the path was so narrow that I thought it was the end of the trail.

But magic begins to happen when you are about to feel completely dejected after putting in lots of efforts. And hope appears in many forms.

That day, the way hope appeared to me was in the form  of a metal railing painted in green. 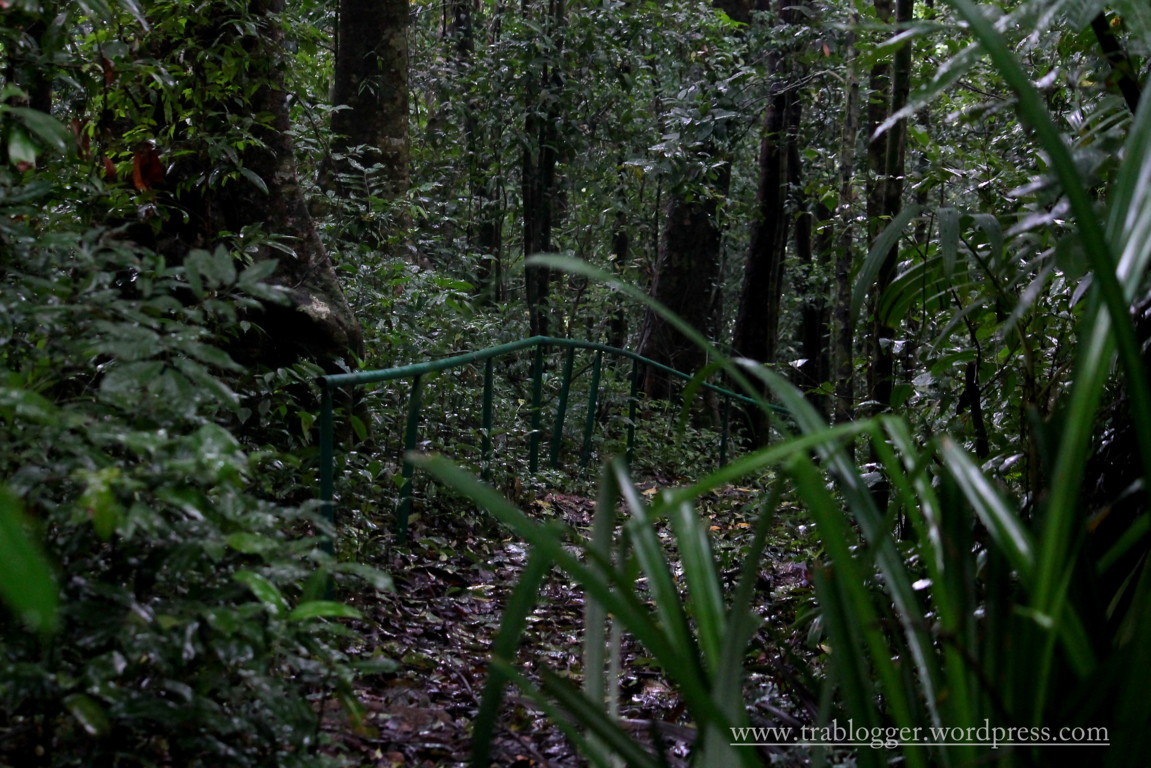 I call it the railing of hope

It was a clear confirmation that I was in the right path and I was about to reach the destination. The joy of finding a man-made structure in the dense forest, especially when you are all alone, is something indescribable.

The steps were steep and the railing stretched itself a long way.

With boosted energy I climbed down the railing fast and then it happened! I started hearing the sound of waterfalls from a distance. All my doubts were gone in that moment and climbed down even faster.

And the first view I got was unbelievable.

Do you see, what i saw there?

The valley, the mountains, the green rainforest covering the naked mountains and above all the seven coloured painting done by the nature. Witnessing that scene was an amazing experience. Being lonely, having doubts and fears, getting leech bytes.. nothing mattered at that moment.

Even beautiful views were waiting for me. I was yet to see the gorgeous water falls. 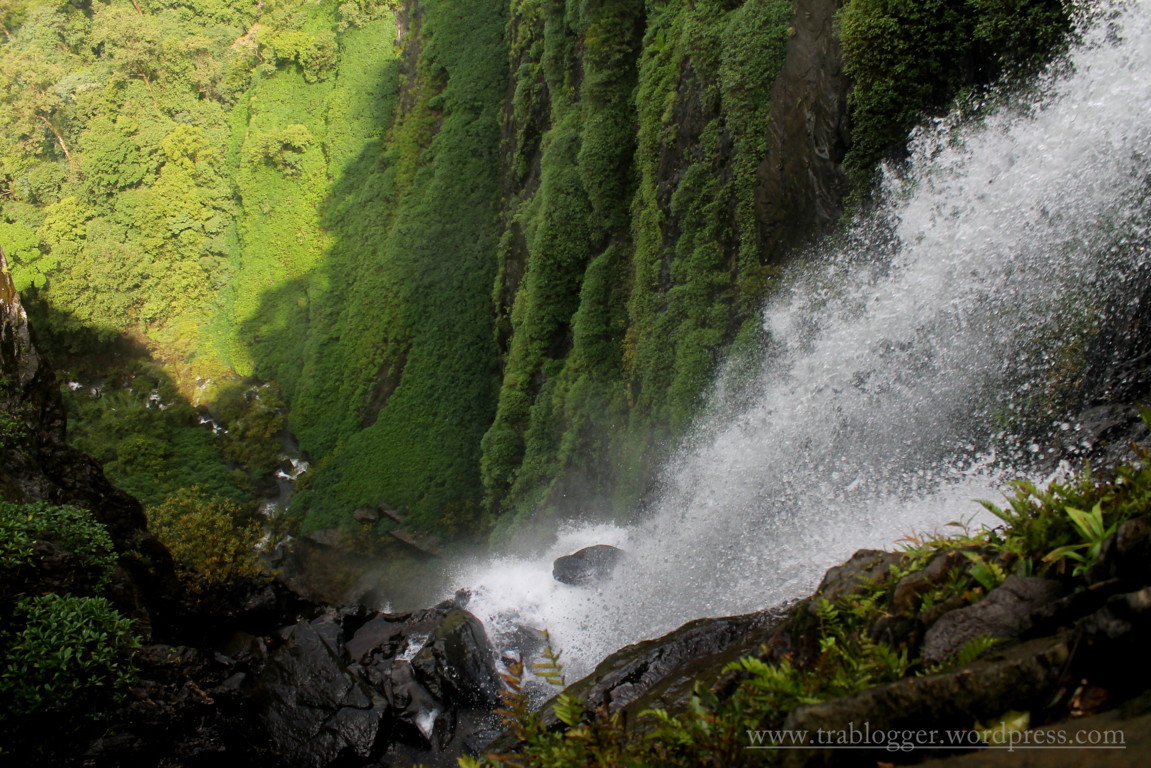 Then started the struggle to find the best spot to capture the essence of the waterfall. There weren't too many options and most of the boulders were really slippery. I once slipped and even hit my camera on a rock.

And Some more of The Gorgeous Onake Abbi falls

After spending sometime, I was about to leave that place. Then I saw the group of people I met at the starting of the trek. I said a hi and left.

This time I had to climb up all those steep steps. 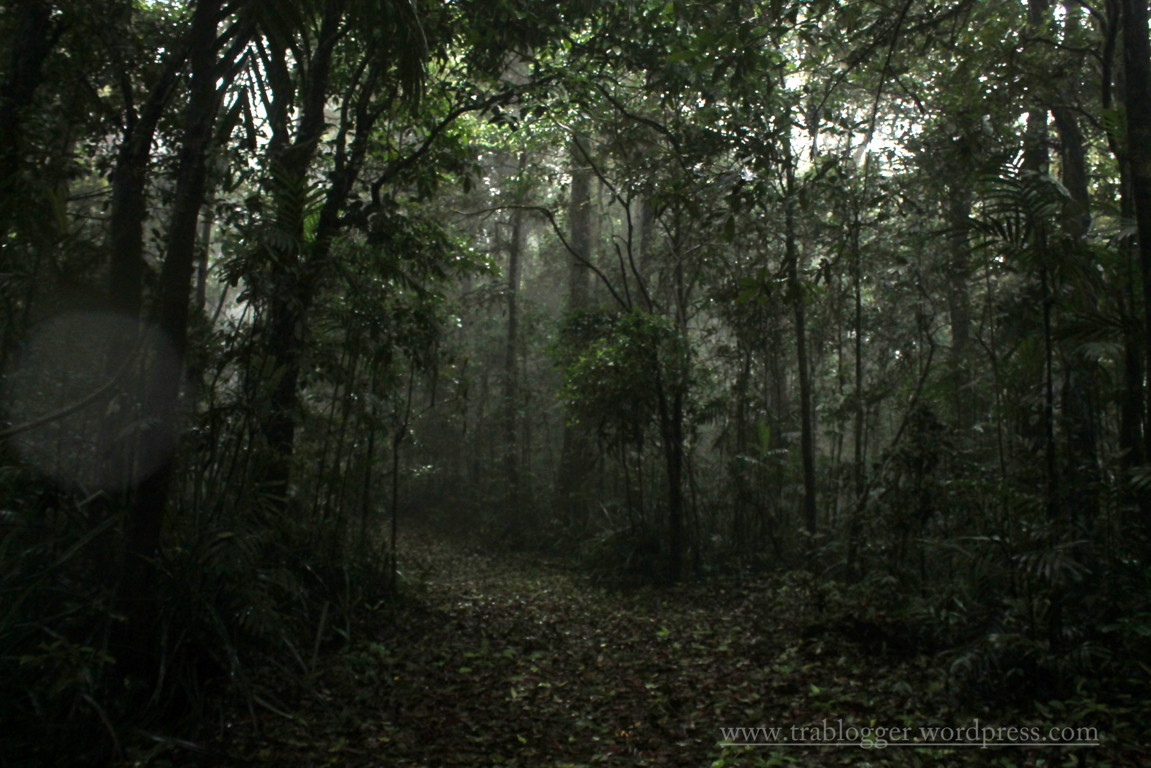 Just as it started to rainq

And later when I walked further ahead, it was even more amazing with those fog filled up in the void spaces of forest. 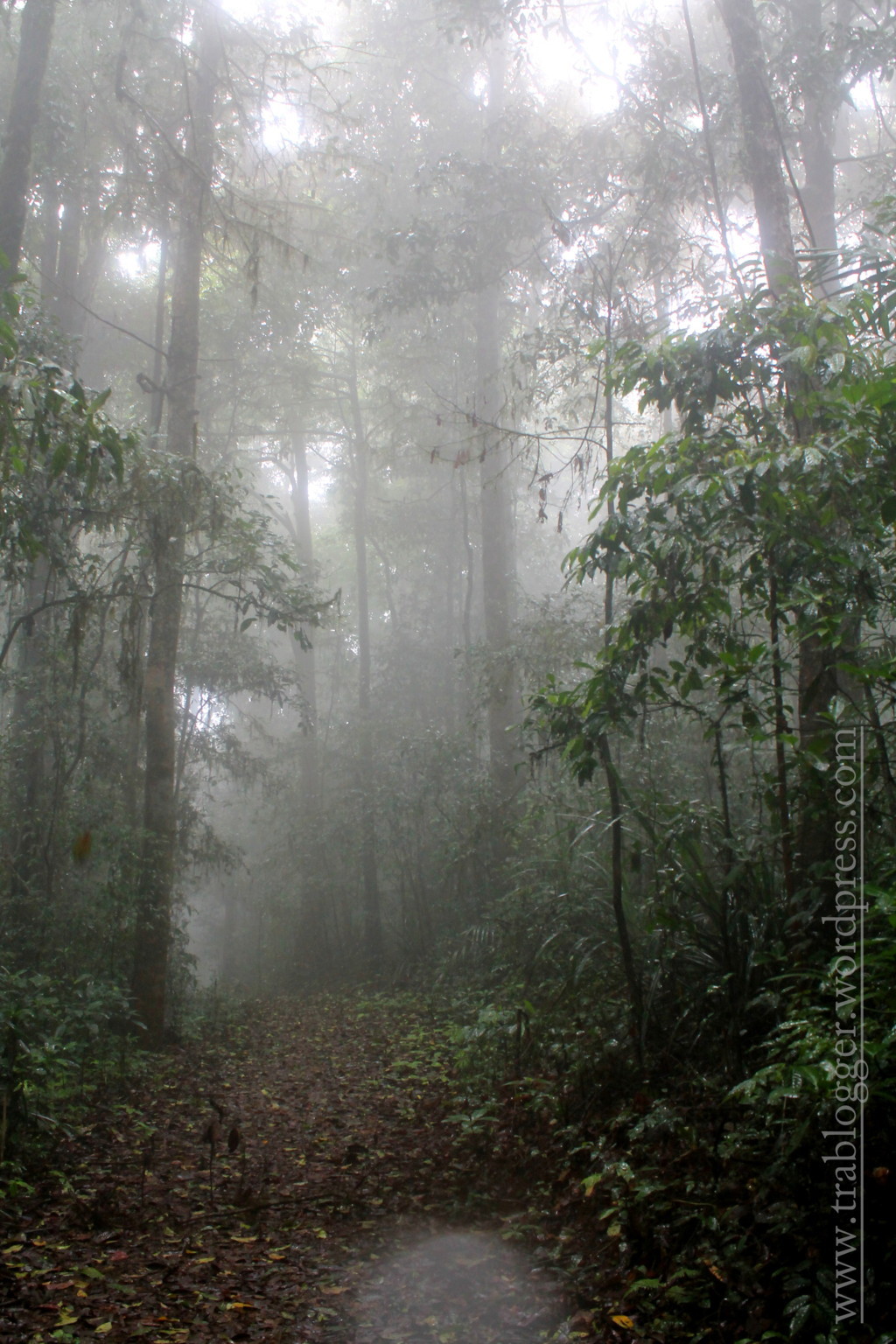 I thought this was, what they call as magical realism!

Would I be able to see all these beautiful  things, if I had quit and gone back at any of those road blocks?

I understood that quitting never means Success. Quitting need not always means defeat, but never success. You can retreat tactically, but again you have to come back for the victory.

So I learned. Never Ever Quit. At the end, rewards will be great.